There is no question that social media has become a marketing staple for business in the last few years. The 2014 Marketing Fact Pack shows that Internet marketing has moved to the second largest spending medium (just behind television) since 2012. It’s proven to be inexpensive and effective; however, it would be a blunder for any business to replace its traditional marketing exclusively with social media. Social media should be integrated with a traditional marketing campaign to be ultimately successful. You can unite the two for measurable results.

Market reports show that companies are generally maintaining their advertising budgets from 2013, but allocating more dollars to innovative marketing platforms like mobile advertising. We are seeing a shift in the perceptions and values of social media in mainstream markets, although in smaller markets, the adjustment to utilize social media is much slower. Perhaps it is still not yet fully understood? How can your business integrate social media with traditional marketing?

Social media has extended the value you are receiving from television, print and radio.

It may cost hundreds to thousands of dollars to produce a television advertisement for cable. With social media, you can share your television advertisement through YouTube, Pinterest and your website at no additional cost. A graphic designer can create multiple ads for your local newspaper or magazines. Why not share the print ad on Facebook, Instagram and Google+, too? To leverage your traditional media, all businesses should practice social sharing.

Recently, I came across a great example of social media integration while watching a show about two entrepreneurs. “Tone It Up” founders, Karena and Katrina, are fitness instructors in California. They offer open classes on the beach one day per month to gain new members. With a few of these special promotions executed successfully in the past, they anticipated over a hundred people. To market the open class, they do traditional advertising weeks prior, including the newspaper, radio, and to complement their campaign – social media. Karena and Katrina show up on the day of the event, and to their disbelief, not one person is present. They realize they forgot to inform their clients that the open class was at a different beach this month! With 45 minutes to spare, they post the address correction on Facebook, Twitter and YouTube. Needless to say, through these social media outlets, their clients received the message and the event was a triumph. Thousands of marketing dollars would have been lost had they not been utilizing social media as a part of their open class campaign.

With all of the benefits of social media and online marketing, a healthy marketing mix still includes traditional media. Despite the evolution of technology, no company can afford to eliminate the segment of the market that chooses not to embrace these trends. To reach these segments, you should still include television, which continues to dominate most advertising budgets, print advertising (newspaper and magazine), radio and outdoor signage. Studies show that most consumers have increased their minutes per day watching television from 2008 to 2013 by six percent. Today’s average is 217 minutes spent per day watching television. Due to the accessibility to digital media with smartphones, notebooks and laptops – minutes per day with digital media has increased by an astonishing 52 percent since 2008. That amounts to a whopping 316 minutes per day! The percentage includes mobile usage, online activity, tablets and other digital media.

No matter what community your business is in, large or small, fast or slow – all businesses need to include traditional and digital marketing in their advertising mix. Do you know of any businesses that can afford to leave out a segment of their consumer demographic? With economic growth on the rise and new, innovative businesses sprouting up everywhere, be sure you are doing everything you can to be a leader in your industry. QCBN

Donna Werking is Founder of Northern AZ Social Media and Digital Marketing located in Prescott, Arizona. She is well recognized for her work in the community and her proficiency has made her an asset to all businesses under her guidance. Learn more about online marketing by contacting Donna Werking, Founder of Northern AZ Social at NorthernAZsocial@gmail.com or (928) 710-7910. 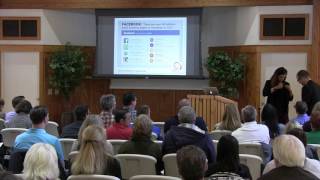 Why Is It Important to Claim Your Online Business Listings?